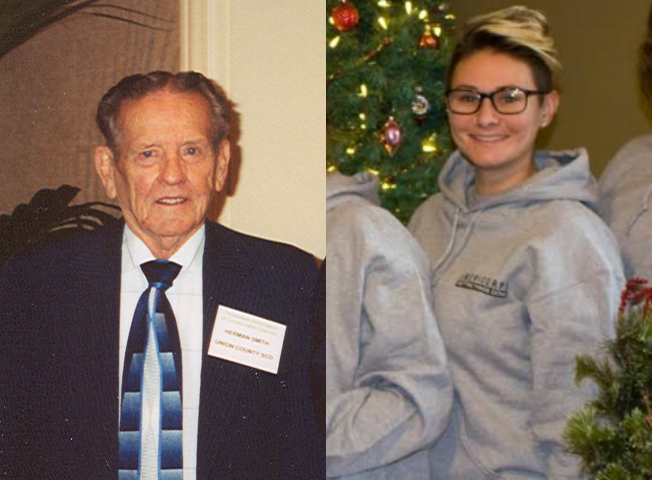 Some people walk through life so well that they leave legacies rather than footprints. Herman Smith, a founding member of the Clinch-Powell RC&D Board of Directors, was just such a person. He served from 1989 until 2006, representing Union County. Herman served in such a way that inspired his granddaughter Kira to follow in his steps.

In 2016 Kira had already carved out a successful path in her career in marketing and advertising working full time for an agency in Knoxville, but she felt a strong pull to put her expertise to work in the non-profit sector. When she heard about an opportunity to serve at Clinch-Powell through the Appalachia CARES AmeriCorps program, she immediately applied and served as she continued her full time work. She attributes some of her draw to Clinch-Powell to the association with her grandfather.

“Most memories of my Papaw include his social outings and always being on-the-go. He would frequently talk about how much he loved Clinch-Powell and how he ‘thought the world’ of everyone he served with. I only remember smiles in relation to Clinch-Powell,” she says. “All the time he would stress the importance of our impact as people and always encouraged protecting our environment and caring for our fellow humans through service – these were what kept the world turning. As a young person, it was very inspirational to witness and now as an adult I can easily see his own values and character as a parallel to Clinch Powell’s mission and work. He genuinely loved the people he served with and for and his fulfillment came from helping others and positively contributing to the community.”

Herman’s contribution to Clinch-Powell was strongly rooted in his love for the farming community and protecting natural resources. Lindy Turner, Executive Director for Clinch-Powell, remembers him fondly, “He was a faithful supporter of Clinch-Powell and an important voice for conservation and agriculture in the area.”

When Kira completed her term of service with Appalachia CARES AmeriCorps, she was selected to serve on the Board of Directors. Recently her journey has taken her to another part of the state, but she remains a friend and supporter of Clinch-Powell. When asked about her experience while serving with Clinch-Powell she said, “It was a joy to work alongside such an amazing staff (who are now great friends of mine), and it was an honor to be involved at a place that my grandfather helped create the foundation for. I watched many great things happen and still feel inspired by its people. I’ll be forever grateful for my time with Clinch-Powell.” And we are grateful for the service of Herman Smith and the legacy he left behind that lives through Kira and others he inspired.